How can other players destroy room objects?

Here is the code snippet of the collision detection where the enemy should be deleted. This script is attached to the enemy. Debug logs are called, but enemy is not destroyed when other players collide with or shoot the enemy. 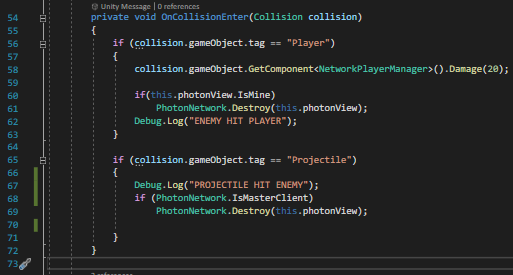 Update: The collision is happening on the client side so the client can not destroy the room objects. A simple RPC call to only the Master Client, that will destroy this game object, fixed the problem! Idk if there is a better wat, but a RPC call worked, for anyone else with this problem.